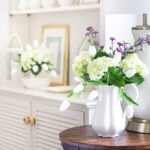 A story about moving on, following your heart, and not being afraid to take a chance.

I have some really big news, so I hope you are sitting down.

The whole thing has happened very fast, so I want to start at the beginning, and tell you everything. There are many chapters to this story, and it’s definitely not finished!

Where It All Began

Most of you know that I have wanted to renovate our kitchen for a long time. For one reason or another, it has never happened, but I was determined that 2021 would be the year. To get the process started, I hired a contractor, and began gathering estimates.

As the estimates rolled in, so did the doubts. I’m very realistic when it comes to how much things cost…but all the same, I was astonished at the estimates that we received. A kitchen renovation was going to be much more expensive than I had anticipated. Still…I forged on, and continued to save money.

Summer 2021 rolled around, and I knew I needed to choose cabinets and a countertop, and begin to place orders. Lead time on cabinets was running anywhere from between 3 and 5 months. However, it was at this point that life got in the way. Just as I was preparing to begin the ordering process, our little dog, Kelly, passed away.

After Kelly’s death, I lost myself for a while. It’s hard to explain…and if you’ve never had a pet, it’s nearly impossible to understand. Because I was out of sorts, I put the whole kitchen project on hold. I attempted to collect my feelings, and took some time to concentrate on my family and friends. Which in hindsight, was the best thing I could have ever done.

*Side note: for a few months, I had been stalking Zillow for houses that might work for my family. Not seriously, but I was looking. There was never a house that remotely interested me. Most were old houses that needed work, and I already had one of those. There was a new subdivision going up on the edge of our town, and even though the houses were brand new, we didn’t like the location. So every now and then, I would open the app and kill some time, but never seriously considered moving. Now…on with the story.

July melted into August, and September arrived when I wasn’t looking. We planned a trip to see our grandchildren, and left for New Jersey on September 15th. On the way, in the car, I opened my Zillow app…and it was at that exact moment that everything changed.

There was a new listing…and it literally ticked every single box on my must-have list…and then some. I’ll get into all that later, but it was in the car that day that my husband agreed to look at this house. Well…he didn’t actually agree, but he didn’t say no! I contacted a friend, who is also a realtor, and asked if we could see the house when we returned from our trip. She said she would take care of it, so all that was left for me to do was pray that it didn’t sell before I could see it!

Our daughter came home, and the two of us looked at the house on Tuesday, September 21st. We took my husband back for a tour that evening, and we made an offer that very night. When the sellers accepted our offer, I felt like I had been given the most wonderful gift in the world.

So…can you guess what’s coming next?

Now we had to sell the house on Sutton Place. I hired a clean-out company, and in a few days, our attic, shed, and basement were emptied. The clean-out people brought a dumpster, so the day before it appeared in our driveway, I told my neighbors what was going on. We have lived beside each other for 28 years, and I wanted them to hear it from me.

It was then that we took the next step in this journey. My neighbors told me that their daughter had just moved to town, and was living in a rental with her family…and that they wanted to look at our house. I think my jaw dropped to the floor! I said that I needed a few days to tidy things up, but they would be the first people to come through.

I finished cleaning, fluffed my pillows, and made everything look as nice as I could. I showed them the house on Wednesday, October 6th in the afternoon. They made a full price offer that night…which we promptly accepted.

When we accepted that offer, any shred of doubt still remaining in my heart disappeared. The fact that every step in this journey fell perfectly into place, one after the other, was not just coincidence. After Kelly died, I prayed for a sign that would point us in the right direction. That might sound dramatic, but what I mean is that I truly didn’t know what we should do. My husband wasn’t completely in favor of a renovation, which added to my doubts. Was it the right decision to plunge into a huge and expensive project? I was confused, and I needed guidance. The bottom line is that I believe God had a hand in this by leading us towards moving, and that my mom was sitting beside him, nudging him along.

Life presents us with choices, and it’s up to us to decide what to do. To be honest, I didn’t give my family much time to weigh the pros and cons of this choice. Because I was so sure it was the right thing to do, my entire family supported me. They never questioned me, or tried to steer me in a different direction. My husband would happily live the rest of his life in the Sutton Place house…but he knew I needed this move, so he did everything he could to make it happen. And happen it did.

The Sugar Maple house officially became ours a few days ago. We’re moving soon, and I would love to take you along as I navigate this next chapter of my life. I’m sure you are wondering what’s going to happen to this blog, due to the fact that it’s called On Sutton Place. Well…nothing is going to change, except the house. I will still be sharing simple décor ideas, recipes, printables, and more. I believe that the blog, as well as our lives, will improve. The Sutton Place house will still be featured, and it will be joined by the Sugar Maple house, along with a collection of fresh and new ideas.

A State of Mind

So going forward, instead of being about a specific house, On Sutton Place will become a state of mind. It’s not about the actual location, it’s about loving your home, and following your heart. It’s about keeping things simple, embracing new experiences, and not being afraid to make a change. It’s about being true to your own personal style, and transforming your house into a home.

I’ll be back soon with more of this story. We’ll say a heartfelt goodbye to the house on Sutton Place, and I’ll introduce you to the Sugar Maple house. I would be very honored if you would join me as I enter this new and exciting phase of my life. I am under no illusion that this is going to be easy, or free of emotion. We have loved our life here On Sutton Place…and this is the house that made me. The memories will all come with me, as well as everything I’ve learned along the way.