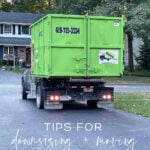 Downsizing + moving tips from empty nesters who sold their family home after 28 years. Information about hiring help, purging, and breathing through the emotions!

After I shared our moving story, I received some emails asking for more details, especially about the cleanout process that I had mentioned, but didn’t elaborate on. At the time, I couldn’t get my thoughts organized enough to actually write about it! Now that life has settled down, I decided to give it a go. What follows are my own personal thoughts, ideas, and advice. Our method may not work for everyone, but hopefully you will take away a nugget or two that will help make your move easier.

The weekend after our offer on the new house was accepted, my daughter came home to help me figure out everything that needed to be accomplished before the move. After we brainstormed, we made a list. The first and second floors of the house were in good shape, so the list consisted of emptying and cleaning the following spaces:

Everything in these three spaces was going to be a.) thrown away b.) donated or c.) put in storage. There were a few things that stayed at the house until the big move, but not much. Due to the fact that we were downsizing, I knew everything in these three spaces would not fit into our new house. Purging was necessary, and I also obtained a storage unit. There were quite a few things that we weren’t ready to part with, but there was no place for them at the new house. So those are the things that went into storage. The bottom line is this: if you are downsizing, you can’t take everything.

After we narrowed down what needed to be done, we turned to Google to find the help we needed. From the very beginning, I was under no illusion that we could accomplish this task without professional help. We found a local business that did basement and garage cleanouts, but they didn’t pack. After striking out a few more times, we hit the jackpot. The business we hired was called Firestorm Movers & Cleanout.

When I initially spoke to the secretary, I was completely honest, and told her exactly what was involved. I even admitted that I hadn’t been in the attic for years and had no idea what was up there! They provided a dumpster, 4 packers/movers, and moving supplies. I was always available to answer questions and guide the sorting. This cleanout phase took almost two full days.

As they emptied each space, they sorted and packed. They put everything going to storage on one side of the garage, the few pieces going to the new house on the other side, and of course, what we didn’t want went in the dumpster. At the end of the whole process, they moved all the storage items to our storage unit.

We all have budgets, and as always, things need to be prioritized. The cleanout of these three spaces had to be done in a timely manner, so it was placed at the top of our priority list. We thought the pricing was very fair, but the cost will vary depending on where you are located, and what kind of help is available.

It Takes A Village

OK…it doesn’t exactly take a village, but it does take the whole family! I’m 100% sure that our move would not have been successful if it weren’t for the involvement of our two adult children. Our daughter, along with her boyfriend, came home often and helped in countless ways. She kept me organized and was the extra brain I needed. Our son came home (from New Jersey to Ohio) for two long weekends, and what he accomplished was amazing. Our daughter-in-law was a trooper, and I was very grateful she encouraged him to come.

Family help is important. If you have adult children, involve them from the very beginning. Ask their advice, and listen to what they have to say. Even if they aren’t available to physically help, they can offer moral support and guidance. The whole process of downsizing and moving is, at times, overwhelming. It’s nearly impossible to handle everything without help. I’m not saying it can’t be done, but having help makes everything much easier.

If family help isn’t possible, ask your friends. If family and friends aren’t an option, consider making room in your budget to hire a handyman.

I’ve had so many of you write and ask how we got this move accomplished in just two months…and the answer to that is mostly luck and a bit of planning. I talked about the way things fell into place in this blog post, and even after we sold our house, it continued to happen. But if I could do it over again, I would definitely give myself more time.

One thing to take into consideration is the time of year your move will take place. I wanted to be in our new house before Thanksgiving, so that’s a big reason I moved things along so quickly. Looking back, from where I am now, I can see that decision put added pressure on all of us, and it really wasn’t necessary.

When it comes to downsizing + moving tips, a very important thing to plan for is allowing extra time for painting and installations. If your painter says the job will be finished in one week, allow two. Our painters didn’t finish on time, and our stove wasn’t delivered until two days before Thanksgiving! In the end, it all worked out, but there were sure some stressful moments.

Breathe Through The Emotions

Even though I knew our decision to move was the right thing to do, the emotions I felt during the process were varied and many. There’s a line in the song “I’m Movin’ On” by Rascal Flatts that goes like this: “I never dreamed home would end up where I don’t belong.” That’s exactly how I felt, and I had to work through the sadness and guilt.

For a little while, I thought I might be giving up by walking out on a house that had given me so much. I’ve never been one to “cut and run,” but at times leading up to the move, that’s exactly how I felt. The only thing I knew to do was place it all in God’s hands, and by the time we moved, I had worked through everything and the guilt was gone. I was very happy to be handing our house off to a young couple who would care for and love it.

It was our turn for a home that required less upkeep, and that better fit the needs of our family. There was absolutely no reason to feel guilty about that, but I had to sort through some baggage to get to that point. The worst thing you can do is push your emotions to the side…so let them come, and just breathe through them.

Thank you for hanging in there and making it to the end. As always, I welcome your comments, especially if you have any downsizing + moving tips of your own.

More about our move: