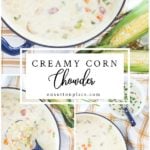 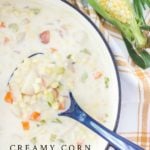 Make this corn chowder recipe for a hearty and delicious fall or winter dinner. It’s super easy and the leftovers are amazing!

Making a homemade pot of soup is quick and easy if you have the right recipe. The corn chowder recipe I’m sharing today is both of those things, and delicious too.

What makes a chowder?

A traditional chowder is a rich soup or stew that is made with cream or milk, and usually thickened with flour or cornstarch. There are  a few chowders that are not milk-based, such as Manhattan clam chowder. The thickness of a chowder can be achieved in two ways. First, the base or broth of the soup can be made thick with a roux. Or if you prefer a thinner base, you can make the chowder thick by adding plenty of chopped ingredients.

Aromatics are vegetables and/or herbs, that when cooked together, add amazing flavor to savory foods. The quintessential combination of aromatics is olive oil, onion, carrots, and celery. Any kind of fat can be substituted for the olive oil, and many other vegetable combinations can be used. As the name implies, the second best thing about aromatics, after their flavor, is the aroma.

Don’t forget to PIN IT to your recipe board!

I shared some corn chowder with my dad, and I gave some to a friend who had been in an accident. Everyone gave this easy corn chowder recipe a thumbs-up! Soup-making is simple if you have good ingredients and a recipe that you can count on. With those two things in your back pocket, you’ll be a pro in no time. 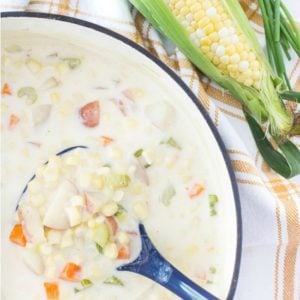 Enjoy a bowl of comfort + warmth with these veggie-loaded soups. With slow-cooker and one-pot soup recipes, a hearty, family-friendly dinner is not only easy, it’s delicious.