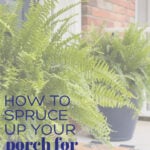 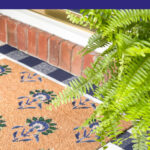 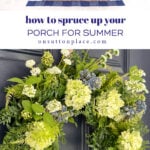 Can’t find the perfect summer planters for your porch? Get ideas and inspiration for filling summer planters, and how to coordinate them with your door.

You know what they say…third time’s a charm. That’s how many tries it took to get the summer planters for our front porch just right! For some reason, and I’m honestly not sure why, this year’s summer porch decor has been a challenge. Most of the time, when the seasons change and it’s time for a porch refresh, I know exactly the look I want. It’s a simple matter of some time and smart shopping to get it. Not so much this year!

It all started a few months when I saw this image on Pinterest. We have had a navy blue front door for years, but it never occurred to me to use navy blue planters. I fell in love with the look, and I knew somehow I was going to make it happen. What I didn’t know was how hard it would be!

I began by shopping for navy blue summer planters. I found a set at Lowe’s and brought them home. Strike one…they were royal blue, not navy blue. I then ordered a set from Amazon, which was strike two. They were more black than navy blue. At this point, I decided that the only way I was going to get the perfect shade of navy blue that matched our door was by painting a set of planters myself. I already had a set of unattractive gray planters, and I already had a quart of Sherwin Williams Naval paint. The paint was purchased last summer to refresh the door…but it was a job that never got accomplished. So I gathered my supplies, and in just a few hours, I had summer planters that are the perfect shade of navy blue.

Many times, dark colored paints look light in the can, and darken after they are applied and begin to dry. This is the case with SW Naval. When I first opened the can to paint the planters, I saw royal blue paint. For just a minute, I wondered if it had been mixed wrong. No worries…it was the correct color! As soon as it started to dry, the rich navy blue shade appeared and all was well.

Once the planters were figured out, the rest of the door area just fell into place. I added a tiny touch of blue to the wreath I made last month. I cut apart two stems of inexpensive faux blue flowers and simply stuck them in between the hydrangeas.

Believe it or not, I purchased the ferns at Kroger for $12.99 each! The ferns sat too far down into the planters, and needed a riser. Two old pots turned upside down at the bottom of the planters did the trick. I love to use ferns because they are very low maintenance, and they pack a huge punch of curb appeal.

The finishing touch is the cute coir doormat layered over a buffalo check rug. I purchased the doormat a few months ago, and unfortunately, it’s already sold out. If you love navy blue, I added some other very cute choices to my Amazon Shop.

The weather here in Ohio has been unpredictable at best. Just a few days ago, it was finally nice enough for me to get out and hose down the entire porch. It was covered in pollen and dust, and definitely needed a good cleaning. It was such a simple task, but so rewarding. A clean porch, and a spruced up door area, gave our tired house a burst of new life. Never under-estimate how much small, easy updates can improve the look and feel of your home.

Thank you for stopping by…and for your friendship.
Until next time,