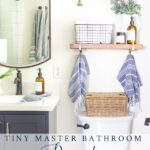 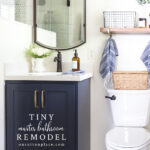 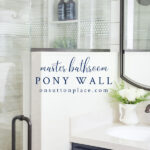 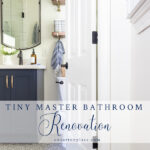 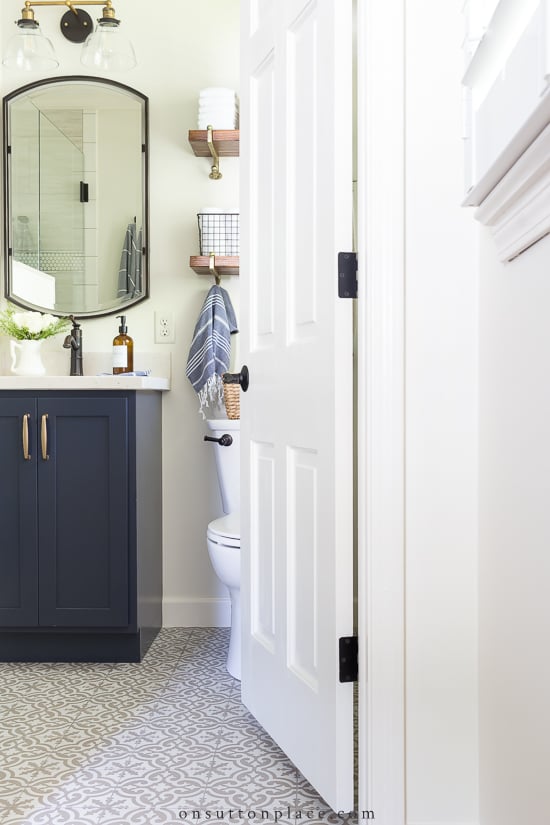 Author’s note: this bathroom renovation took place at our house on Sutton Place. It’s one of my favorite transformations ever!

In early 2020, before COVID changed all our lives, my husband suggested renovating both of our upstairs bathrooms. You can read about how that all came about HERE. March rolled around, and we were just getting ready to start, when our state was quarantined. The renovations were put on hold, until mid-May, when we were finally ready to begin. This post wraps up both of the bathroom projects, and I’m happy to say that we are very satisfied with everything! 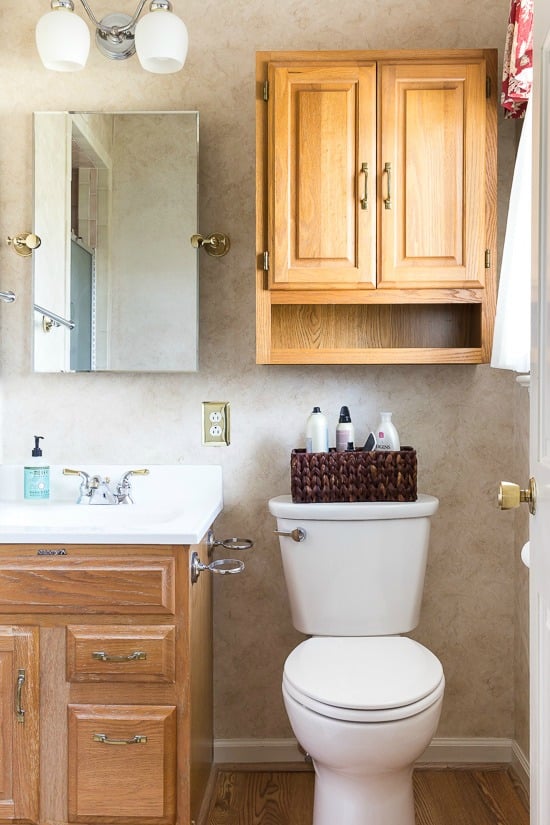 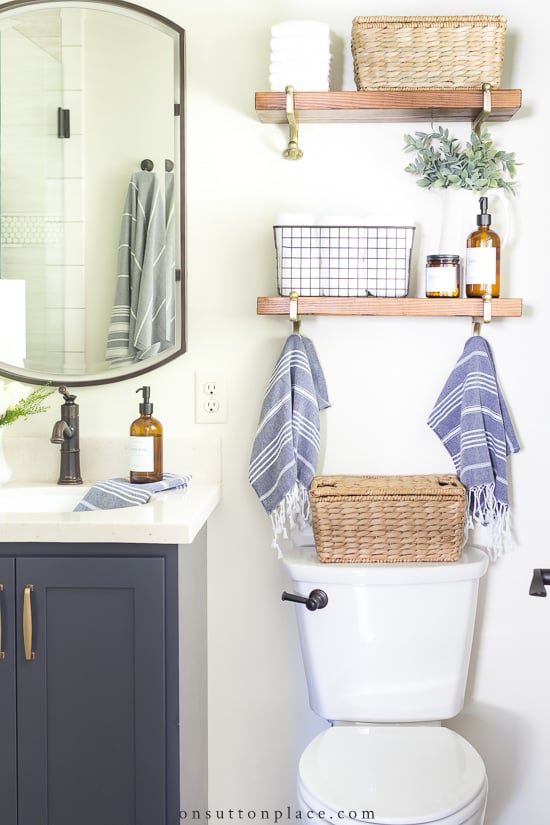 Featured today is our tiny master bathroom, the second of the two bathrooms to be renovated. You can read about how the design came together HERE.

*Note: I did my very best with these photos, but the honest truth is that it was the most challenging space I’ve ever photographed. I tried to get a wide shot, but it was impossible. I’m showing it in sections, but the basic layout is easy to figure out. Affiliate links included. Click HERE for my disclosure statement. 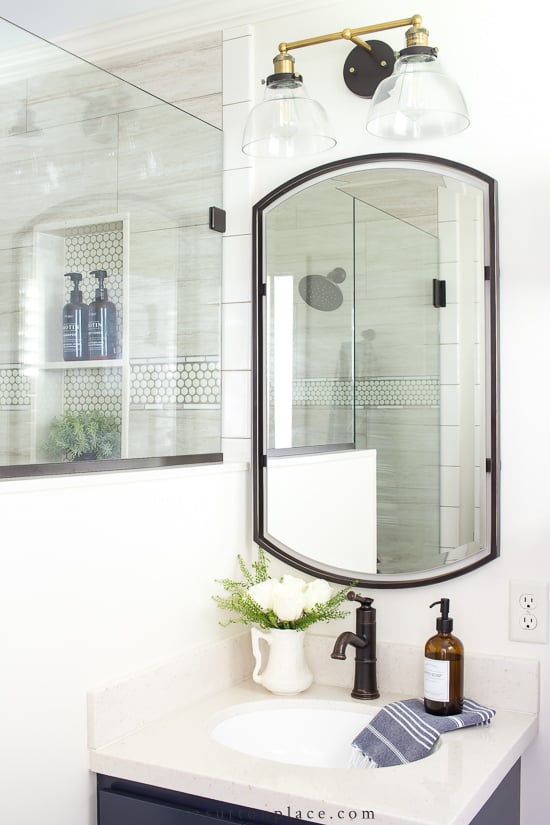 The vanity wall looks very much like what’s in our hallway bathroom, just on a smaller scale. The double light fixture brings the eye up, which also helps to make the room feel bigger. Due to the small vanity and top, and to maximize the space around the sink, I chose a single lever oil rubbed bronze faucet from the Moen Belfield line. It’s tall and very easy to use. 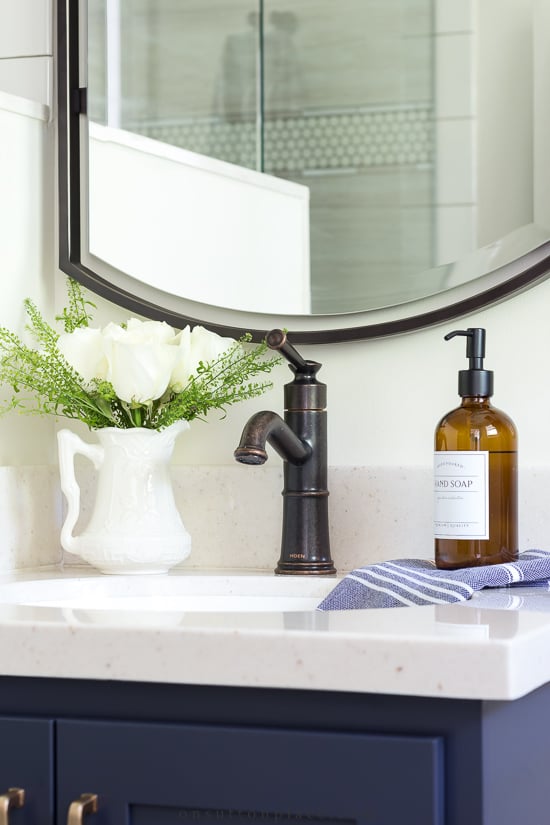 The biggest change in this master bathroom also had the most impact. We removed the entire shower wall and bulkhead, and replaced it with a pony wall. Adding the pony wall opened up the bathroom, and made it look twice as big. The frameless enclosure and shower door add to the clear and bright feeling. 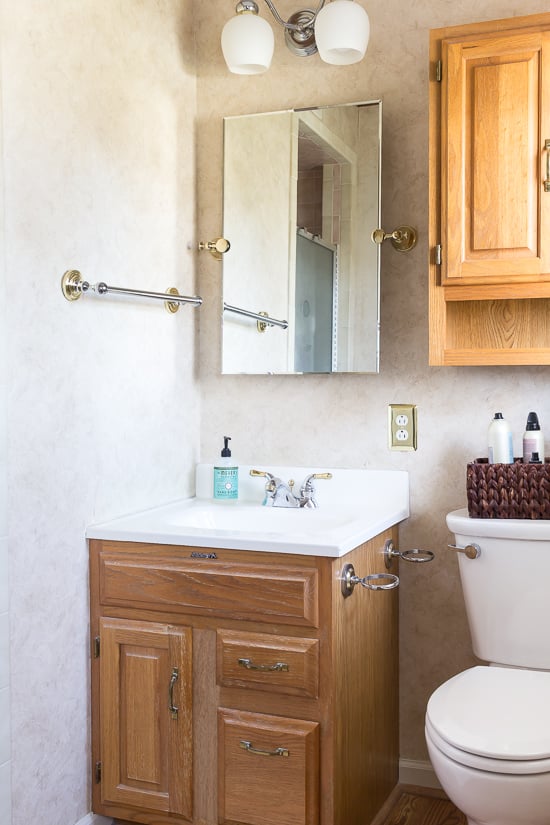 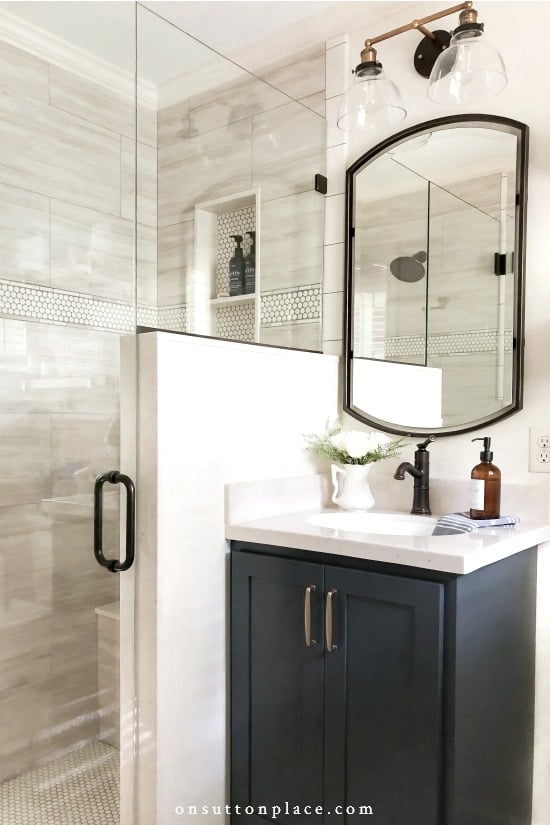 What is a pony wall?

A pony wall is a half wall that extends partway from floor to ceiling, and doesn’t provide any support. A pony wall provides the function of a wall, yet enables an open design and clear ceiling line. In our case, we needed a wall to separate the shower and vanity, but we didn’t need that wall to go all the way to the ceiling. 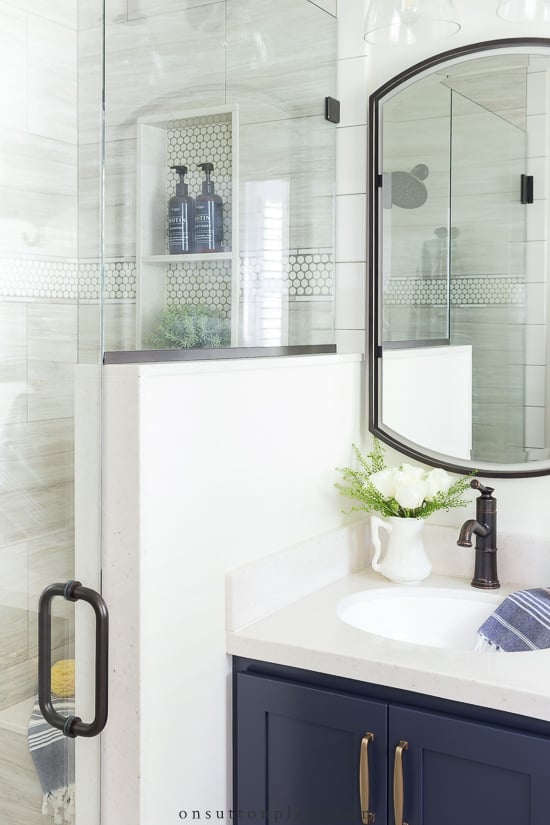 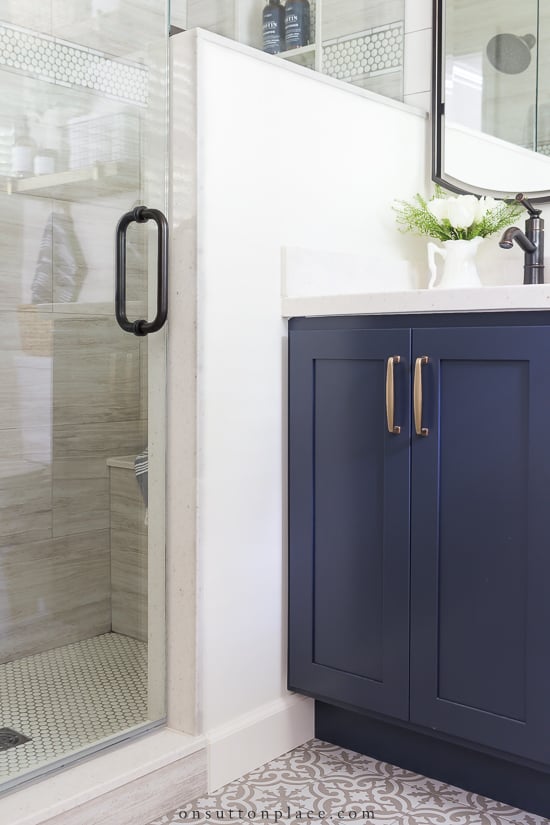 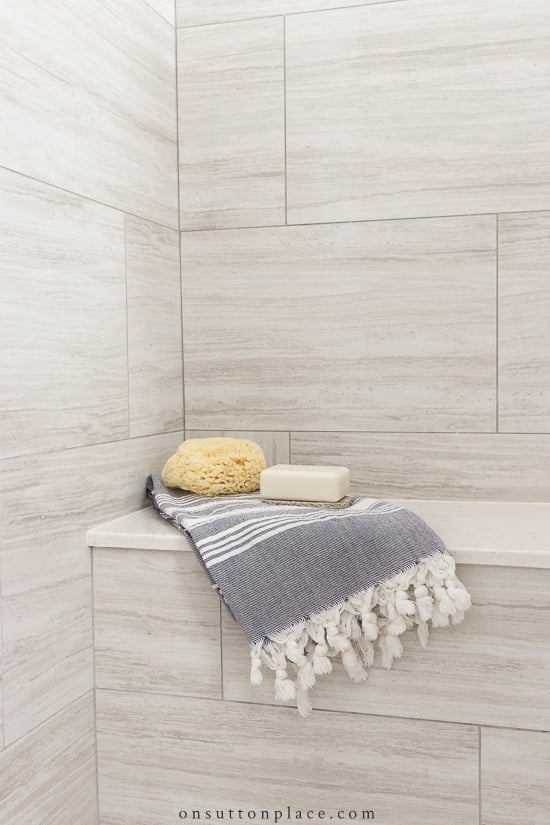 The original shower was big enough to allow us to install a seat, and still have plenty of room. In fact, the original shower had too much wasted space. We placed the niche over the shower seat, and it’s the perfect set-up. Once again, the shower seat is a poured piece of cultured granite. The shower head and handle are simple, but that’s what I wanted, so I’m happy with the way it all came together. 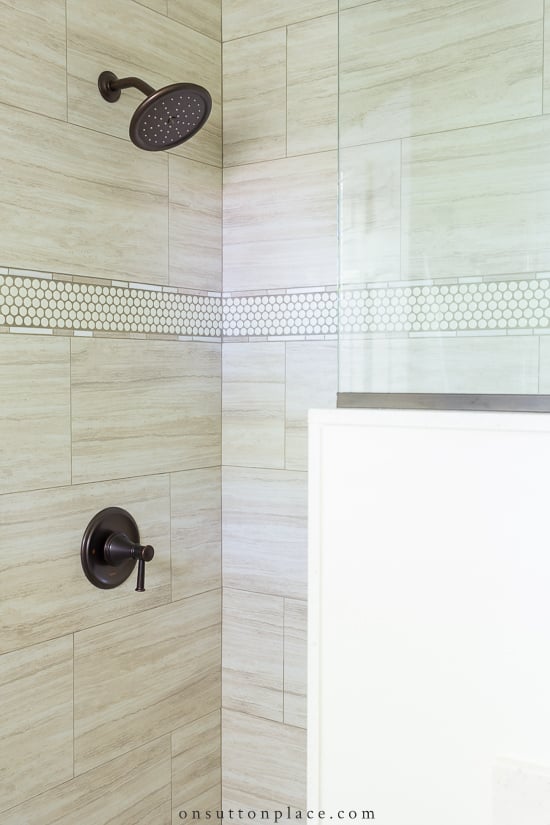 The ceramic floor tile is easy to clean, and it adds just the right amount of personality. It’s the same color and size as the tile in the hallway bathroom, but it’s a different pattern. 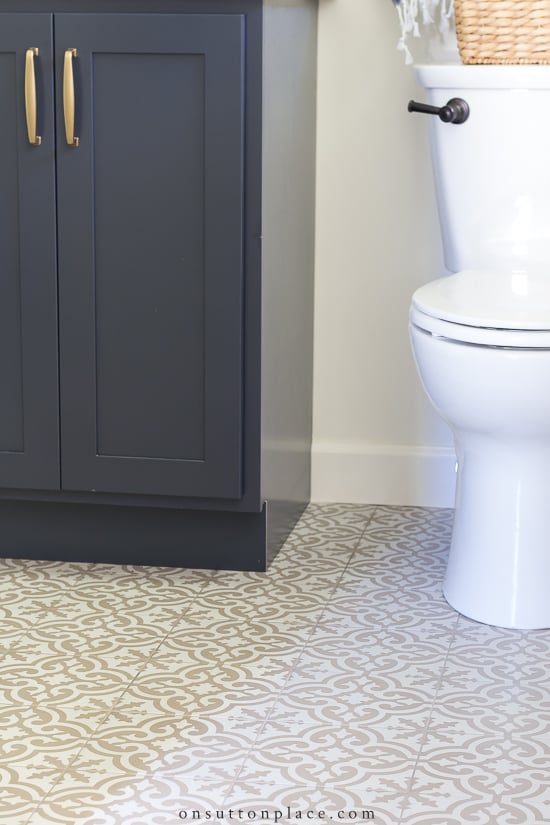 I definitely compromised on storage with this remodel. Before, I had a large over-the-toilet cabinet which held almost everything I needed. I’ve managed to make the new storage set-up work, and work well. Everything I need on a daily basis fits under the sink, or on the open shelving. My hair brushes and supplies are in the basket on the top shelf. The shelves also hold hand towels and washcloths. I have extra towels and washcloths under the sink. 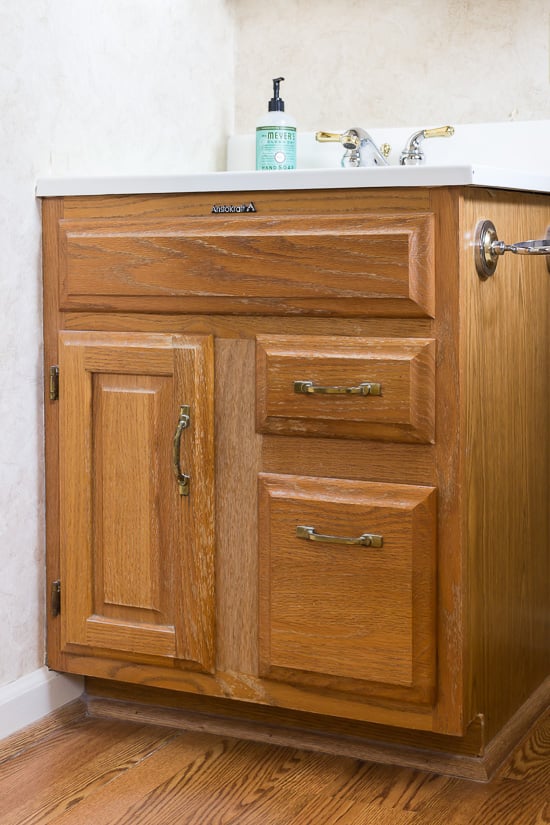 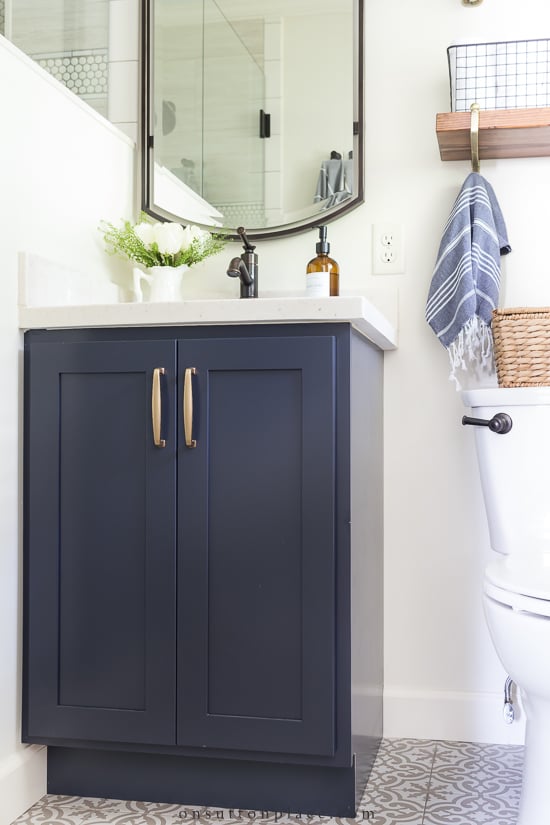 My hairsprays and mousse are under the sink as well. (If you are wondering about my makeup, I keep it in our powder room downstairs.) The only thing I couldn’t fit in the bathroom was my hair dryer. I solved that issue by clearing a space in a dresser drawer. The dresser sits right outside the bathroom door, so it’s close and convenient. There is no room for bath towels, but our other bathroom has loads of space, so they are all stored there. 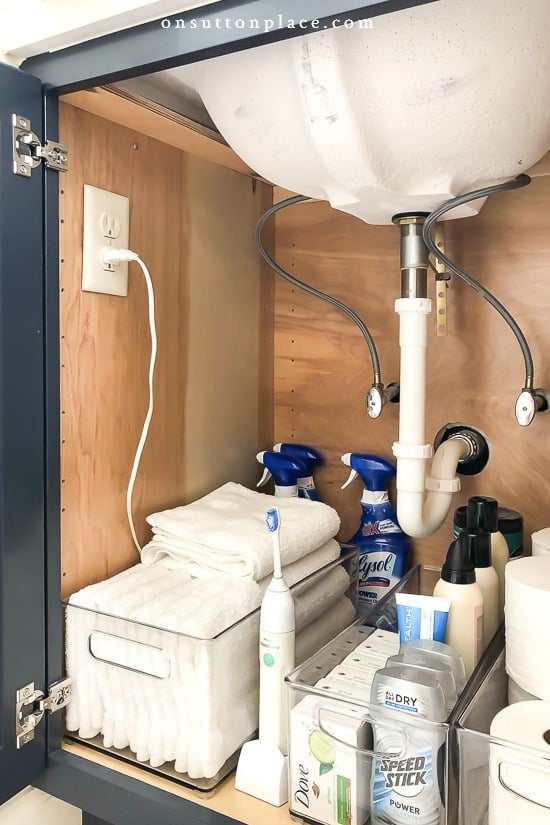 One of the handiest features of this new bathroom is the electrical outlet we installed under the sink. I always hated keeping my electric toothbrush on our tiny counter. It took up space, and was always being sprayed with something! The outlet was placed high, so it’s well out of the way of stored items. This little outlet is actually one of my favorite things about this new bathroom!

Thank you all for your kind comments and emails in regards to the two bathroom projects. I have been asked several times about the total cost of the renovations. At first, I didn’t want to include those numbers in the reveal posts, but I’ve since changed my mind. I heard from a reader yesterday who genuinely seemed grateful that I shared the cost. I know it’s very helpful in the initial planning stage, because it’s very hard to see the big picture at the beginning. So here it is!

All together, including labor and all materials, the hallway bathroom came to just under $15,000.00. The master bath came in at about the same price.

Yes…that is a ton of money. Because these were my first total renovation projects, there were things I didn’t think of, which of course, broke the original budget. Those things were:

One last thought. We waited a long time to fix these bathrooms. We raised two kids, paid for two college educations, and made sure our retirement was on course. When we were finally able to renovate, I didn’t want to cut any corners…or make too many compromises. I feel certain both projects could have been accomplished for less…especially if you have free labor at your disposal.

Because the projects were delayed due to COVID, I was able to save some extra money, which helped with the overages. We were still very definitely over budget though! I’m happy to say that we are caught up, and everything has been paid for.

Would I do it all again? The answer to that question is a very definite YES. I learned so much, and the entire experience was fun. Once again, I would like to thank Fogarty Construction for these beautiful remodels. I never thought I would say this, but I actually miss the guys coming and going! 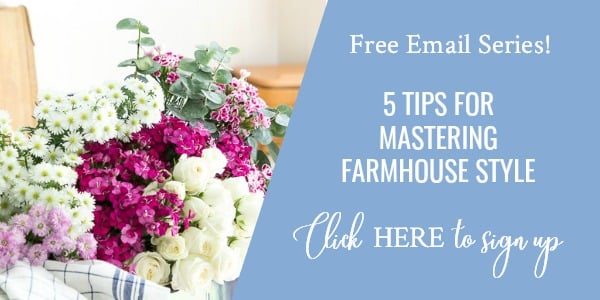