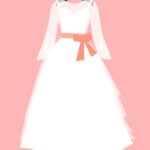 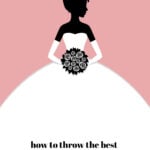 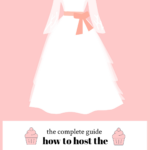 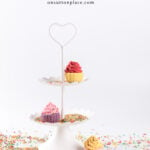 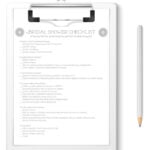 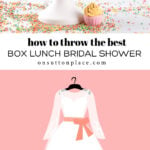 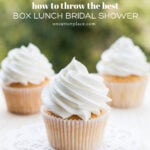 Tips and ideas for hosting a DIY box lunch bridal shower in your home, along with more bridal shower ideas. I’m sharing all the scoop on the box lunch assembly, what we served for dessert, and more! 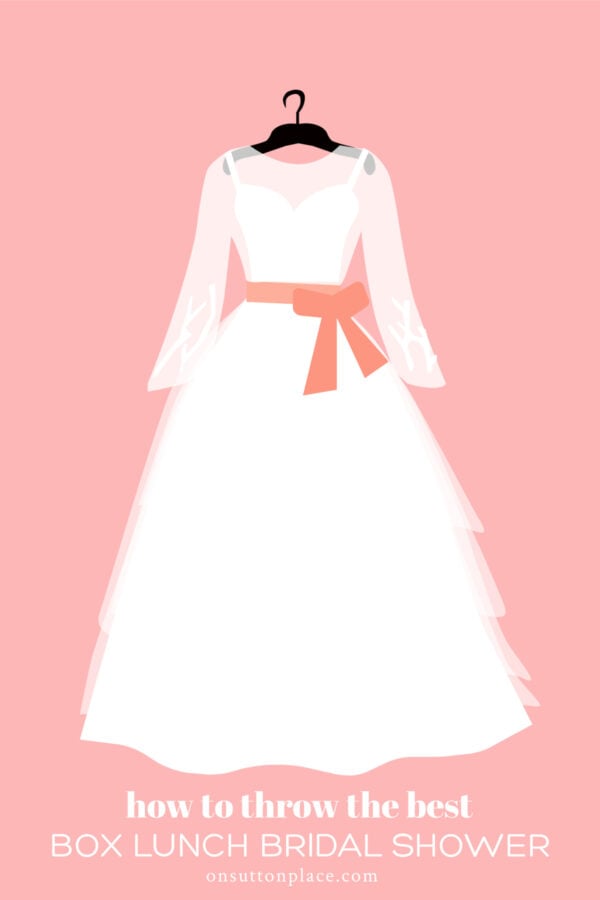 *This post was originally published in 2013. It has been revamped with current information, up-to-date links, and additional ideas. Enjoy!

So…someone you love is getting married, and you need bridal shower ideas. You are in the right place! My daughter and I hosted a spring box lunch bridal shower, and I’m sharing every little detail, along with tips for making it a beautiful day.

How to Host a Box Lunch Bridal Shower

The most important first step when planning any type of party or get-together is to make a list. Start at the very beginning, and give yourself plenty of time. (A free checklist is available at the end of this post!) We started out with a large guest list and no affordable venue. After going back and forth for a few days, we finally decided to have the shower here, in our home. When we were brain-storming ideas on how we could accommodate around 50 people, we came up with the idea of a box lunch. Pinterest helped, but we quickly found out that we had to find our own resources, and come up with our own plan. 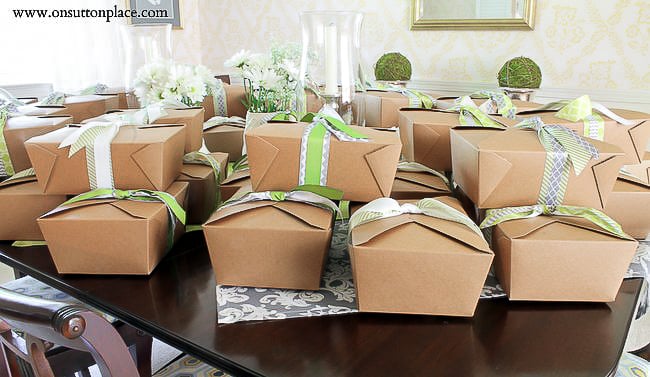 We went back and forth trying to decide on something that was easy to pack, as well as easy to eat. This was our final decision.

After looking around online for what seemed like hours, we decided on these brown kraft boxes. We wanted something with a flat top, so it we could tie pretty ribbon around each box. I originally planned to tie bows around the boxes, but then I realized that we would not be able to stack them in the refrigerator. The only way they were all fitting in our two refrigerators was if they were stacked…so the bows were adjusted to a simple slip knot. 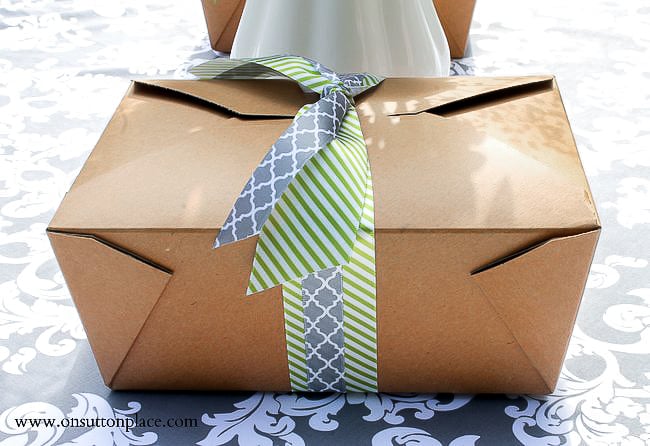 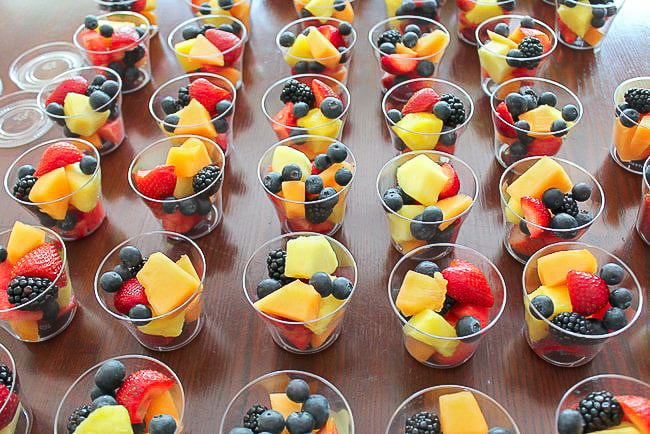 We knew we wanted some sort of specialty bags for the croissant and chips. After looking around online, we chose these cute bags. Thankfully, we packaged a croissant and some chips about a week before the shower to see how they would taste after sitting in the refrigerator overnight. They tasted fine, but the food oil soaked through the bags. It looked terrible! So we used cellophane bags as a liner to solve that problem. We folded the bags over, and sealed them with a round white sticker. 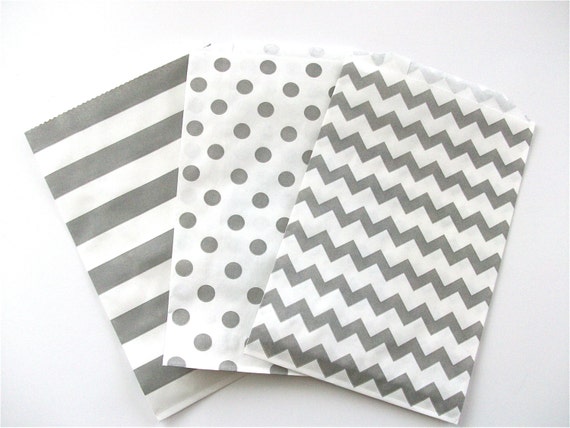 We knew we were definitely going to use disposable flatware, but we didn’t want basic white plastic forks. We chose silver, heavy duty plastic forks that looked very nice after we wrapped each one in a napkin, and tied a cute bow around it! 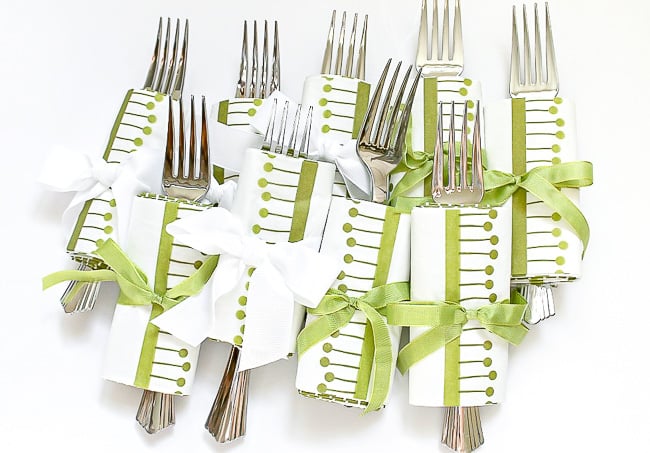 Once we chose all the elements for the box lunches, the next step was figuring out how to make it all fit. That took some trial and error, but after a few tries we came up with something that looked nice, but not crowded.

The finishing touch was tying a double layer of ribbon around each box. Even though it was a bit tedious, this was my favorite part of the whole thing! 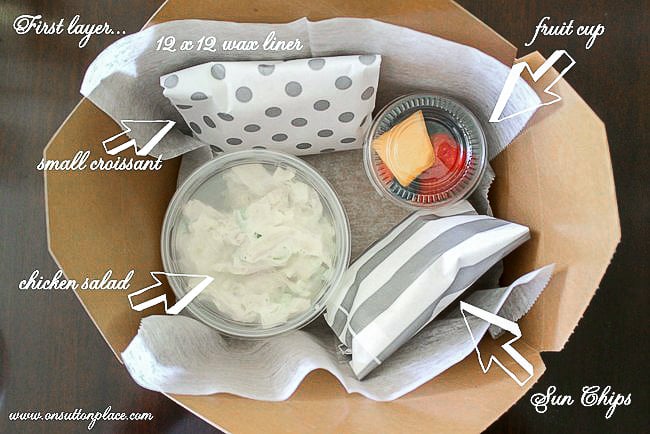 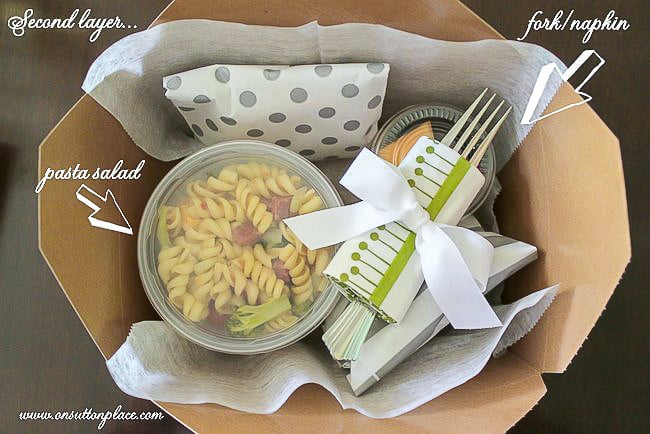 We assembled the boxes the night before the shower, and stowed them away in our refrigerators overnight. We used the refrigerator in our kitchen, along with an extra refrigerator we have in our garage. A few minutes before guests started to arrive, we neatly stacked the boxes on the dining room table. That was it! Not even 10 minutes on the day of the shower and the food was taken care of. 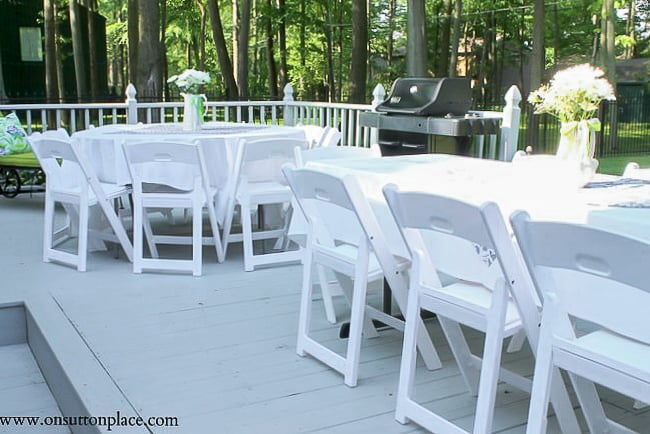 When we had the box lunch assembly all planned out, we moved on to the other details. We knew we were unable to seat everyone due to space constraints, but we decided to provide some seating on our back deck. We rented white tables, chairs, and tablecloths which completely transformed the space. 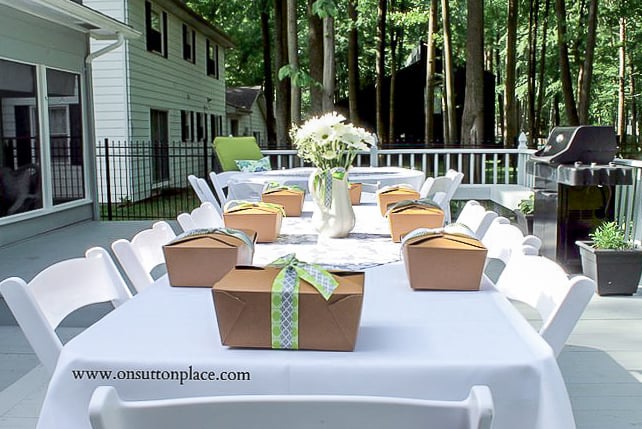 I gathered together my creamware pitchers, and filled them with daisies and baby’s breath for quick and easy centerpieces. Colorful pieces of ribbon were tied onto the handles of all the pitchers. To complete the seating area, we purchased coordinating fabric, and made square toppers for all the tables. 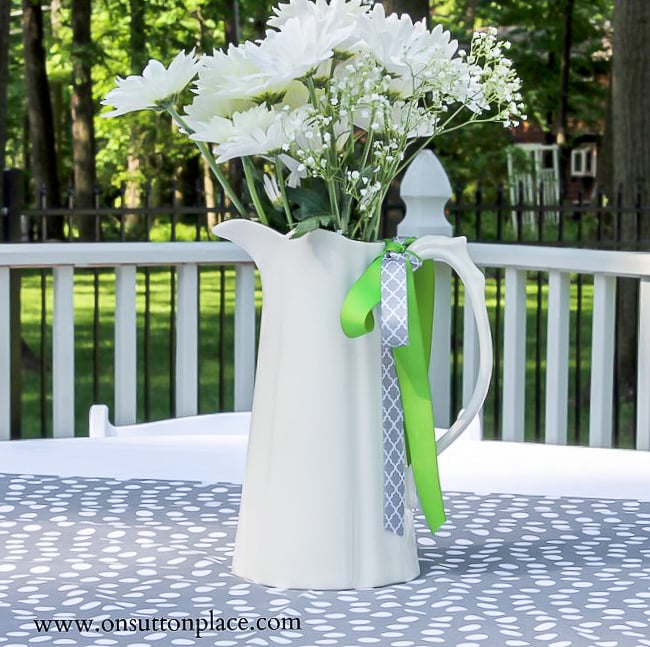 We opted not to include dessert in the boxes. Instead, we put together a dessert table for the guests to help themselves. We considered baking our own cupcakes, but decided to buy them at a sweet little bakery in our hometown. We added cute cake pops and cookies as well. My daughter and I agreed it was one of the smartest decisions we made! Not only did it save us tons of time, all the dessert choices were truly delicious. 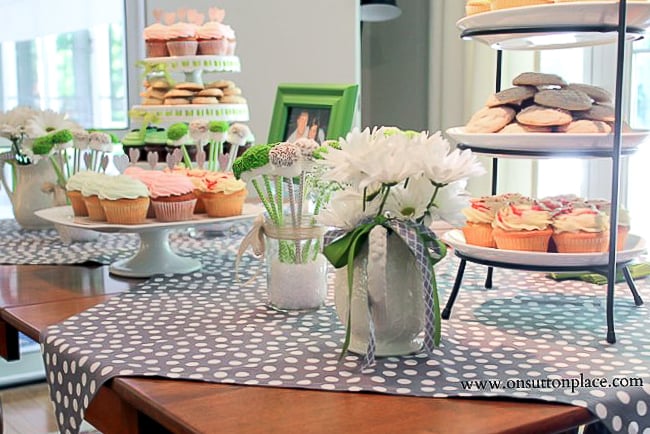 The entire day was as close to perfect as we could get. This box lunch bridal shower turned out just like we had planned (which you have to admit hardly ever happens.) The bride-to-be felt special and received some incredible gifts to begin her life as a “Mrs.”

See how we planned a box lunch baby shower for my daughter-in-law by clicking {HERE.}

DON’T FORGET TO PIN THIS! 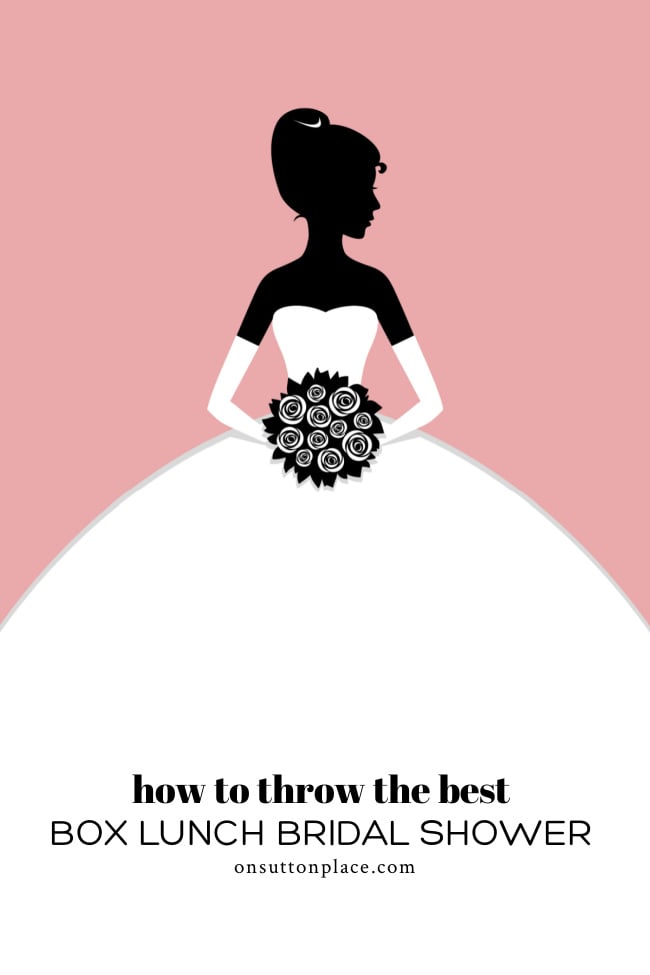